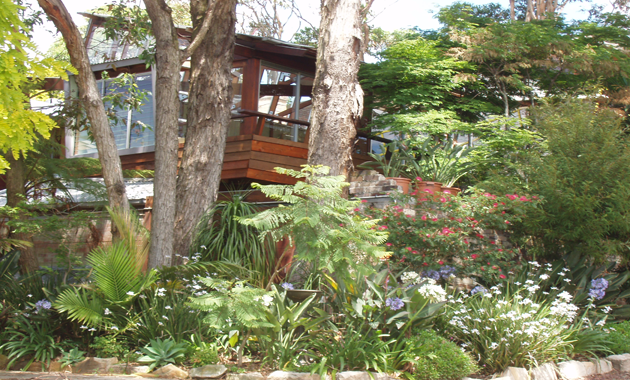 In a bustling, feral, inner-city suburb this is a peaceful, tropical, tree house; an oasis which excludes the surrounding visual ugliness. The light, timber construcon and the use of glass louvres for controlling ventalation gives it that Queensland, holiday feeling.

It’s a free-flowing, open and flexible house with only one box – a blue Tardis plonked in the front space – concealing a shower room, wardrobe, larder and refrigerator, separating the reception and guest areas from the kitchen. END_OF_DOCUMENT_TOKEN_TO_BE_REPLACED

Kept the shape of the exisng, termite-ridden, mber-framed, aluminium siding house, but re-built it totally. Exploded the interior to create an open “Barn”:

Home Oﬃce opening to a Deck.

“Noah’s Ark crashes into shearer’s shed”
Behind the naïve facade of an early twentieth century, timber-framed, worker’s cottage, it seems that a clinker boat has collided with an outback shearing shed, creating a structure that is exposed and proudly naked. The raw frames and grids appear to be falling over, with massive booms hanging oﬀ the long, tilting masts.
These seemingly chaotic, deconstructionist shapes were  derived strictly from the specific character of the site: as the split levels slide down the sloping land, the living areas are tipped upside, for sun, light, limited views and venlaon, while the bedrooms and ulity rooms are downside giving privacy and enclosure.
The house is built around three landscaped courtyards and three decks are used to extend the living spaces.

Three Franks and a Paul

For the inspiration, perhaps there were memories of Frank Lloyd Wright – the first and greatest modern architect – with hints of Taliesin West and the Lake Tahoe houseboats; of pre-Post-modern Frank Gehry’s use of raw materials; of Franklin D. Israel’s variegated shapes, asymmetrical perspecves and layering of colours.

Then there are the modern jazz musicians such as Paul Desmond who created lyrical flights of fantasy over Dave Brubeck’s altered time signatures.

It was designed as a composition in four movements:

1. Starting in 1993 with the rear extension;
2. The front demolition and replacement;
3. The connecting stairs, studio and courtyards; and
4. The construction of a spa/plunge pool with waterfall.

The construction techniques required were low-tech, and as I produced hundreds of detailed drawings and ordered all the materials, there has been a passing parade of many carpenters and other sub-contractors puttig it together.

With the 8 tips in this guide, you will discover how to find the right architect for your design and for your budget.